Eoin Daly, Lecturer in Law, National University of Ireland, has published Rousseau's Constitutionalism (Hart Publishing, 2017). Here is a description of the book's contents.


Despite Rousseau's legacy to political thought, his contribution as a constitutional theorist is underexplored. Drawing on his constitutional designs for Corsica and Poland, this book argues that Rousseau's constitutionalism is defined chiefly by its socially directive character. His constitutional projects are not aimed, primarily, at coordinating and containing state power in the familiar liberal-democratic sense. Instead, they are aimed at fostering the social conditions in which a fuller sense of freedom – understood broadly as non-domination – can be realised across all social domains. And in turn, since Rousseau views domination as being deeply embedded in complex social practices, his constitutionalism is aimed at fostering a radical austerity – social, economic and cultural – as its foil. In locating Rousseau's constitutional projects within his social and political theory of servitude and domination, this book will challenge the predominant focus and orientation of contemporary republican theory. Leading republican thinkers have drawn on the historical republican canon to articulate a model of constitutionalism which is, on the whole, 'liberal' in focus and orientation. This book will argue that the more communitarian orientation of Rousseau's constitutionalism – that is, its socially-directive focus – stems from a sophisticated and compelling account of the sources of unfreedom in complex societies, sources which are ignored or downplayed by the neo-republican literature. Rousseau embraces a communitarian social politics as part of his constitutional project precisely because, pessimistically, he views domination as being deeply embedded in the social relations of the liberal order. 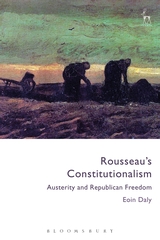 Posted by Christine Corcos Posted on 9/01/2017 11:53:00 AM
Email ThisBlogThis!Share to TwitterShare to FacebookShare to Pinterest
Labels: Jean-Jacques Rousseau, Political Theory