There's a good bibliography of writings about Franz Kafka and the law by Christine Corcos, although it was last updated in 1995.
Posted by Daniel J. Solove Posted on 8/16/2005 02:00:00 PM No comments:
Email ThisBlogThis!Share to TwitterShare to FacebookShare to Pinterest
Labels: Corcos, Kafka

Melville's Billy Budd and Security in Times of Crisis

My essay, Melville’s Billy Budd and Security in Times of Crisis, 26 Cardozo L. Rev. 2443 (2005), written for a law and literature symposium at Cardozo Law School, was recently published. The symposium was held in celebration of the 20th anniversary of the publication of Richard Weisberg's The Failure of the Word. The symposium issue will be out shortly, but all the articles are now available on Westlaw and Lexis.

I’ve placed a final version of my Billy Budd essay on SSRN. Here’s the abstract:


During times of crisis, our leaders have made profound sacrifices in the name of security, ones that we later realized need not have been made. Examples include the Palmer Raids, the McCarthy Era anti-Communist movement, and the Japanese-American Internment. After September 11th, this tragic history repeated itself. The Bush Administration has curtailed civil liberties in many ways, including detaining people indefinitely without hearings or counsel. These events give Herman Melville's Billy Budd renewed relevance to our times. Billy Budd is a moving depiction of a profound sacrifice made in the name of security. This essay diverges from conventional readings that view Billy Budd as critiquing the rule of law. Instead, Billy Budd supplies us with a radical and unsettling set of insights about why our leaders often fail to do justice in times of crisis. The novella suggests that by manipulating procedure under the guise of law, Vere gives the appearance of following the rule of law, when, in fact, he is not. This is particularly illuminating, as the Supreme Court in Hamdi v. Rumsfeld has held that normal procedures required by the Due Process Clause can be modified and watered-down for enemy combatants.

This essay is a quick read for anybody interested in thinking about how Billy Budd relates to security and civil liberties.
Posted by Daniel J. Solove Posted on 8/12/2005 02:15:00 PM No comments:
Email ThisBlogThis!Share to TwitterShare to FacebookShare to Pinterest
Labels: Billy Budd, Herman Melville, Solove 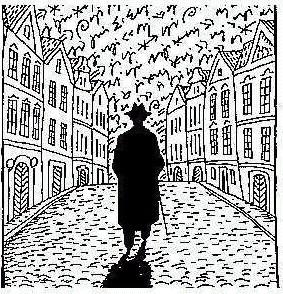 This is something I posted about a month ago on PrawfsBlawg, but it's relevant to this blog too, so I'll cross-post:

Judge Alex Kozinski and his law clerk, Alexander Volokh recently published an opinion by a panel on U.S. Court of Appeals for the 9th Circuit in a law review article. The article is called The Appeal, 103 Mich. L. Rev. 1391 (2005). The judges on the panel were Judges Alex K., Bucephalus, and Godot. No reason is given for the inexplicable delay, as the case was argued and submitted in 1926 but not decided until 2005. And no reason is given why the opinion was published in the Michigan Law Review rather than in the Federal Reporter. Shame on the panel!
The opinion begins:

The late Josef K., a thirty‑something male, claims that "[s]omeone must have slandered [him], for one morning, without having done anything truly wrong, he was arrested." T.R. 3.

The procedural history of this case is complicated and patchy, but what is clear is that, after being rude to his arresting officers, appellant came late to his initial interrogation and disrupted the proceedings. He refused to attend further interrogations, submitted no evidence or brief in his defense and repeatedly accused judicial authorities of corruption and incompetence.

He was apparently convicted, though the conviction does not appear in the record. On the eve of his thirty‑first birthday, K. was taken to a quarry by two guards and executed. "With failing sight K. saw how the men drew near his face, leaning cheek‑to‑cheek to observe the verdict. 'Like a dog!' he said; it seemed as though the shame was to outlive him." T.R. 231. As it has.

The panel denied K.’s claims regarding his arrest:

Even though he was under arrest, K. was still allowed to "carry[] on [his] profession" and was not "hindered in the course of [his] ordinary life." T.R. 17. Also, K. admitted that the arrest "ma[de him] laugh," T.R. 47, and that, to the extent the incident tended to "spread the news of [his] arrest [and] damage [his] public reputation, and in particular to undermine [his] position at the bank," "none of this met with the slightest success." T.R. 48. Without cognizable harm, K. lacks standing to contest his arrest. De minimis non curat lex. . . .

While we're on the subject of trifles, we address K.'s claim that he was arrested without a warrant. At the time of the arrest, K. showed the guard his identification papers and demanded, in return, to see the guard's papers and the arrest warrant. T.R. 8. Not only was he not shown these, he was also told that the guards "weren't sent to tell" him why he was arrested. T.R. 5.

We see no problem. Before ordering an arrest, the authorities "inform themselves in great detail about the person they're arresting and the grounds for the arrest." T.R. 8. They don't "seek out guilt among the general population, but . . . [are] attracted by guilt . . . . That's the Law." T.R. 8‑9; see also Decl. of Penal Colony Officer ("Guilt is always beyond a doubt."); Gerstein v. Pugh, 420 U.S. 103, 113 (1975) (arrest warrant not necessary for arrest supported by probable cause).

The panel affirmed the conviction, denying poor K. justice once again (the first time being his sudden execution):


K.'s only clear claim is that he is innocent. See, e.g., T.R. 47, 148, 213. But how can K. credibly claim innocence when he admits to not knowing the law? T.R. 9. He might as well dispute what the meaning of "is" is. The fuss he makes about how innocent he feels "disturbs the otherwise not unfavorable impression [he] make[s]." T.R. 14. Especially ludicrous is his suggestion that no one can "in general be guilty," as "[w]e're all human after all, each and every one of us." T.R. 213. That's how guilty people always talk.

In any event‑‑and this is the nub of the matter‑‑we fail to see what's so special about being innocent. See Commonwealth v. Amirault, 677 N.E.2d 652, 665 (Mass. 1997) ("[O]nce the [criminal] process has run its course . . . the community's interest in finality comes to the fore."). We will assume, for the sake of argument, that K. did not commit the crime for which he was convicted and executed. Can we be sure that K. did not commit some other, worse crime, that was overlooked? To ask the question is to answer it. The law works in mysterious ways and that which should be done is presumed to have been done. It follows that that which was done needed doing. K. was convicted and executed after a legal process that, as we have seen, is unimpeachable. He must have deserved what he got.


K.'s overarching complaint, that "the Law should be accessible to anyone at any time" and that he has been denied entry to it, T.R. 216, "rings hollow." Alex K., Scholarship of the Absurd: Bob Bork Meets the Bald Soprano, 90 Mich. L. Rev. 1578, 1583 (1992). The very existence of these proceedings has provided an entrance for K. to defend himself. K. has consistently refused to cooperate with court officials' repeated attempts "to straighten out his complex case, regardless of the time and cost." T.R. 251. No one else could gain admittance here, because this entrance was meant solely for him. If he nevertheless remained outside, he has only himself to blame.

This opinion is in flagrant disregard of the law. I am especially outraged that Judge Godot never attended oral argument, and the opinion has been written without any indication he has read the papers or discussed the case with the other panel members. Such a disregard for justice is Kafkaesque, to say the least.

Perhaps the most ironic opinion pertaining to Josef K. is a real one by the U.S. Supreme Court. In Joe Kafka v. United States, 121 S. Ct. 1365 (2001), the U.S. Supreme Court issued its typical one-sentence order, denying certiorari without explanation: “The petition for writ of certiorari is denied.” Recall the parable in The Trial: “Before the Law stands a doorkeeper. . . . The doorkeeper sees that the man is nearing his end, and in order to reach his failing hearing, he roars to him: ‘No one else could gain admittance here, because this entrance was meant solely for you. I’m going to go and shut it now.’” A one sentence denial of cert., without explanation . . . how appropriate for Josef “Joe” K.
Posted by Daniel J. Solove Posted on 8/12/2005 01:53:00 PM No comments:
Email ThisBlogThis!Share to TwitterShare to FacebookShare to Pinterest
Labels: Kafka, Trial (The) 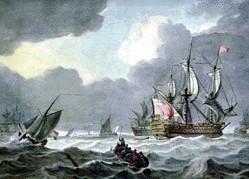 For those interested in Herman Melville's Billy Budd, there's a terrific online resource to the text. It provides a complete text of the work with hyperlinks that contain illustrations, definitions of nautical and other terms, and additional resources.
Posted by Daniel J. Solove Posted on 8/12/2005 01:26:00 PM No comments:
Email ThisBlogThis!Share to TwitterShare to FacebookShare to Pinterest
Labels: Billy Budd, Herman Melville

I've been teaching a seminar in law and literature for many years, and I thought I'd provide a link to my syllabus if it will be of use to anybody. The basic pedagogical approach to my course is to teach it in a jurisprudential manner, illustrating how literature contributes to elucidating enduring philosophical issues in the law. There are, of course, a myriad of different approaches to the course, but for those interested in mine, the syllabus is very detailed and might be of interest.
Posted by Daniel J. Solove Posted on 8/12/2005 01:16:00 PM No comments:
Email ThisBlogThis!Share to TwitterShare to FacebookShare to Pinterest
Labels: Syllabi

This blog will cover law and humanities topics. It is still in the early stages. It will be a group blog, with a variety of contributors from different fields. Right now, it is still in its infancy, but it is my hope that it will blossom over time into a leading resource for scholars, students, lawyers, and anybody else interested in the intersection between law and the humanities.
Posted by Daniel J. Solove Posted on 8/12/2005 11:59:00 AM No comments:
Email ThisBlogThis!Share to TwitterShare to FacebookShare to Pinterest
Newer Posts Home
Subscribe to: Posts (Atom)