Lawrence Russell's Culture Court website discusses film, literature, and other media that have law-related themes. Check it out here.
Posted by Christine Corcos Posted on 7/29/2016 11:53:00 AM No comments:
Email ThisBlogThis!Share to TwitterShare to FacebookShare to Pinterest
Labels: Law and Film, Law and Literature, Law and Media, Law and Radio

Yes, we've been watching the Republican and Democratic Conventions, and they've been interesting--even historic. But what about what's been going in London? At Whitehall, the ginger furred Larry the Cat is still in possession of Number 10 even as Prime Ministers come and go. David Cameron Brexited. Enter Theresa May. Larry Remained.

A four-footed rival appeared, however. Tuxedo cat Palmerston has taken up residence at the Foreign Office, and things are not going well between Larry (not, frankly, a great PM name--why not Winston, or Churchill, or Atlee) and Palmerston (now, there's a great Foreign Office moniker). The two have staked out territory and exchanged undiplomatic paw punches.  Palmerston seems to be getting the better of these skirmishes. Not only did he manage to infiltrate No. 10--he had to be ousted by security--but once outside he stared down an officer. He also dispatched Larry to the vet for emergency care, although it seems he might be missing some fur himself. Tough moggy, that Palmerston. I wonder what would happen were he appointed to oversee Brexit negotiations. Do EU cats all speak the same dialect of Feline?

Larry also used to mix it up with the former FO kitty, Freya, who was eventually sent off to the country to avoid future spats.

Meanwhile, the Treasury has acquired its own fluffy--Gladstone (also a great name). Apparently, the 18-month-old has been around for about a month. The Houses of Parliament have been questioning why they don't have their own mousers. More coverage on the "diplocats" from CNN here.

Will Palmerston continue to tick Larry off? Will Parliament get its own felines? Will members of the Commonwealth demand pawrity? I smell a TV series, complete with furry politicians carrying out intrigue behind doors that are only partially closed (a cat would never allow a door to be left completely closed). Maybe some dog assistants and mouse minions. House of Claws. 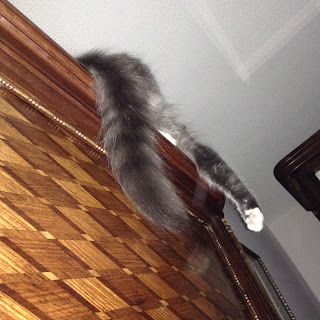 Houdini, waiting for the premiere of House of Claws. "Don't call me until it airs. And order pizza."

Update: The Cabinet Office is probably getting its own feline, and His or Her Furriness will probably be called Cromwell. I would have gone with Melbourne or Churchill, but that's me.
Posted by Christine Corcos Posted on 7/29/2016 11:53:00 AM No comments:
Email ThisBlogThis!Share to TwitterShare to FacebookShare to Pinterest
Labels: Cats, Law and Politics

Ekins on the Constitution as an Object of Interpretation

Richard Ekins, University of Oxford Faculty of Law, is publishing Objects of Interpretation in Constitutional Commentary (forthcoming). Here is the abstract.


This paper argues that the central object of constitutional interpretation is the Constitution, which is an intentional lawmaking act rather than a text floating free in the world, and that the point of such interpretation is primarily to understand the meaning that those who made the Constitution intended to convey by promulgating the text in question. The paper develops these claims by way of a critique of Cass Sunstein’s recent argument that there is nothing that interpretation just is, contending that he misunderstands the way that intention works in language use in general and that the alternatives to intentionalism that he outlines each fail. The radical interpretive choice for which he argues is ruled out by the nature of the Constitution. The final part of the paper considers the various ways in which one might understand the Constitution as an object requiring interpretation and outlines the significance that this understanding has for interpretive practice.

The full text is not available for download from SSRN.
Posted by Christine Corcos Posted on 7/29/2016 11:38:00 AM No comments:
Email ThisBlogThis!Share to TwitterShare to FacebookShare to Pinterest
Labels: Cass Sunstein, Constitutional Theory

Although my tone in this post is a little flippant, the theme of the episode Mr. Biden will guest on is not. The episode will feature the backlog of untested rape kits that currently plagues a number of jurisdictions and thus endangers sexual assault prosecutions. Mr. Biden will play himself in a press conference in the episode, recognizing Olivia Benson's work in the area. More here from the Wrap, here from the CBC.
Posted by Christine Corcos Posted on 7/29/2016 11:26:00 AM No comments:
Email ThisBlogThis!Share to TwitterShare to FacebookShare to Pinterest
Labels: Law & Order: SVU (Television series), Law and Gender, Law and Television, Law and Violence

Eli Wald, University of Denver College of Law, is publishing Lawyers’ Identity Capital in volume 22 of the International Journal of the Legal Profession (2016). Here is the abstract.

Download the article from SSRN at the link.
Posted by Christine Corcos Posted on 7/28/2016 04:09:00 PM No comments:
Email ThisBlogThis!Share to TwitterShare to FacebookShare to Pinterest
Labels: Lawyers, Lawyers and Society, Legal Profession

Acclaimed writer James Alan McPherson has died at the age of 72. He won the Pulitzer Prize for Fiction in 1977 for his work Elbow Room. He was the first African American writer to win the prize.

Professor McPherson, who taught at the University of Iowa's Writers Workshop for many years, retiring in 2014, as well as at the University of Virginia, was also a graduate of Iowa, receiving a master's degree in fine arts, after graduating from Harvard Law School. One can find that legal training reflected in his writing. As Sam Roberts notes in the New York Times obituary for Professor McPherson, he "would invoke the equal protection clause of the 14th Amendment and infuse his literature with the principles of diversity propounded by Albion W. Tourgée in his brief in 1896 against segregated railroad cars in Plessy v. Ferguson."

The James D. and Catherine T. MacArthur Foundation awarded James Alan McPherson one of the first "genius grants" in 1981.

A selected bibliography is below:

Posted by Christine Corcos Posted on 7/28/2016 12:14:00 PM No comments:
Email ThisBlogThis!Share to TwitterShare to FacebookShare to Pinterest
Labels: James Alan McPherson, Law and Literature, Law and Race, Lawyers as Authors

Popular culture references and comparisons are beginning to emerge in the wake of Brexit. Steve Peers @StevePeers invokes a Star Trek: The Original Series reference for a job for Nigel Farage, who has stepped down as the leader of the United Kingdom Independent Party. 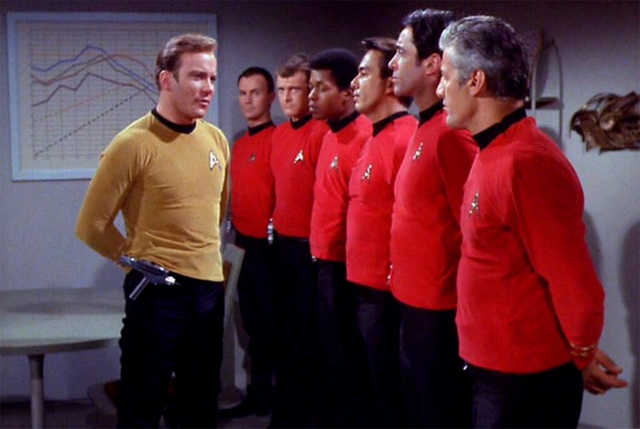 Oh, feel the burn (not Sanders, or Switzerland, which is not a member state of the EU).


Holmes notes that a watchdog that alerts on the presence of strangers did not do so when someone approached on this occasion. Thus, the dog knew the person who approached it, This observation has now become so obvious a deduction for pop culture detectives on tv and in film whenever a dog is in a scene that if either a professional or amateur sleuth doesn't mention the dog's behavior, viewers automatically know that the detective is an idiot (and that the screenwriter has never read the literature, or seen any mystery or detective movies or tv over the past 50 years). It would be interesting and novel to substitute a cat or a ferret for the dog in some of these scripts. Monkeys and parrots have been done, BTW (Columbo: Death Hits the Jackpot (1991)) and Perry Mason: The Case of the Perjured Parrot (1958)).

The Curious Incident of the Dog in the Night-Time has also become a Tony-winning Broadway Play.

(Parodying Waiting for Godot). Mr. Green has retweeted it numerous times. He is understandably quite fond of it; it's clever, but also, we've been Waiting For Brexit for a month. It's sort of like Waiting To Brexhale.

And this long hommage to Samuel Beckett, from a number of Tweeters: