Harry Potter has inspired articles by two Thomas Jefferson School of Law professors. Julie D. Cromer's "Harry Potter and the Three-Second Crime: Are we Vanishing the De Minimis Doctrine from Copyright Law?" is forthcoming in the New Mexico Law Review and is also available in the TJSL Legal Studies Research Paper series as 05-11. It's also downloadable from the SSRN. Here is the abstract:

Aaron Schwabach has published "Harry Potter and the Unforgivable Curses: Norm-Formation, Inconsistancy, and the Rule of Law in the Wizarding World," again in the TJSL Legal Studies Research Paper series 05-13, and in volume 2005 of the Roger Williams Law Review. It is also downloadable from SSRN. Here is the abstract:

The astounding success of the Harry Potter series of children's fantasy novels is an unexpected cultural phenomenon, but a welcome one for lawyers and legal academics: Harry's story is a story about law, and about a society trying to establish a rule of law. There is law in every chapter, and on almost every page, of all six books. Sometimes the legal questions hang in the background, while at other times they are the focus of the story: We see numerous trials, and the author gives us statutes, regulations, school rules, and even international agreements to consider. Harry's world is administered, ineptly, by the Ministry of Magic. The Ministry of Magic's muddling misrule is not quite dictatorship, but it is not fair and just, either. Under the stress of the first war against Voldemort's Death Eaters the Ministry regime, like some Muggle governments in similar circumstances, adopted an ad hoc and inconsistent approach to justice. It imprisons people, and sometimes executes them, without a trial. It keeps careful tabs on law-abiding citizens, but is unable to track down terrorists. It reaches inaccurate results in about half of its criminal trials, in large part because defendants are not represented by counsel. This article attempts to examine the problems with the wizarding word's legal system by focusing on one particular problem: the Unforgivable Curses, three spells whose use on humans is punishable by life imprisonment. The three Unforgivable Curses are the Cruciatus Curse, which causes unbearable pain; the Imperius Curse, which allows the user to control the actions of the victim; and the Killing Curse, which causes instant death. There are inconsistencies both in the application of the law and in the selection of certain curses as Unforgivable. The choice to outlaw these three spells, and not others that may be even worse, reflects something about the values of both Harry's world and ours. The article explores the moral assumptions underlying this choice, examining the legal treatment of these spells under the Ministry's regime as well as under relevant British (Muggle) and international law.

Jane Baron (law, Temple) has posted on SSRN her article entitled Property and 'No Property,' 42 Hous. L. Rev. (forthcoming Jan. 2006). According to the abstract:

This essay addresses the vexing question of whether property enhances freedom. Contemporary property debates tend to focus on what might be called the affirmative side of property rights - what they give (or ought to give) to owners vis a vis others and vis a vis the government. But if, as the Realists long ago suggested, property is social, involving relations between people, and if property involves politics, the exercise of power by some over others, then it makes sense to think about the negative side of property rights, the effects of not having any property to speak of. Persons owning very few things inhabit a realm of severe social and legal vulnerability, susceptible to the power of many (and, of course, the government) without having (m)any reciprocal power(s) over others. I call this situation "no property."

This paper seeks to describe the legal category "no property." Rather than enumerate its iterative disabilities, I enlist a recent novel, Valerie Martin's Property, in the hopes of describing "no property" imaginatively. The novel illustrates the ways in which legal states that deprive persons of the ability to own or to control property - slavery and coverture - render persons susceptible to the power of others. Notwithstanding enactment of Married Women's Property Acts and the end of slavery, many today - such as the homeless and the extremely poor–remain in a position of comparable legal and social vulnerability. For persons so situated, the freedom-enhancing aspects of property are more or less beside the point. What they experience as a legal matter is, to recur to some older terms, duties, no-rights, liabilities and disabilities. These iterative negatives together constitute a status, a status in which it becomes possible for them to be seen as, essentially, objects, not subjects.

Effective regulatory schemes take existing schemes of property rights into account. "No property" is such a scheme. Because it consists so largely of negatives, of rights and powers that people do not have, it is difficult to recognize it as such. But it is as serious a constraint on regulatory possibility as, say, the ownership rights of those affected by limitations on the cutting of old growth forests or by required reductions in factory emissions. If we want to "do something" about the poor and the homeless - whether it be banishing them to special "zones" or targeting services to them - we will need to understand the legal situation in which we find them. For this reason, I argue, we must continue to seek to understand and define the legal category of "no property."

Posted by Daniel J. Solove Posted on 10/18/2005 12:42:00 AM No comments:
Email ThisBlogThis!Share to TwitterShare to FacebookShare to Pinterest

Anomaly in Delbanco's Account of the "Billy Budd" Debate

Dan Solove lists Andrew Delbanco's fine new book called Melville: His World and Work. One of the book's merits is its even-handed treatment of scholarship about Melville's works. Unfortunately, in assessing the Law-Lit debate about Billy Budd, Sailor, the author seems to this reader to privilege more traditional accounts of the tale (i.e. those justifying Captain Vere's behavior). Part of this relates to Delbanco's interpretive technique itself, e.g., p. 311: "As if some mischievous philosopher has dropped by to divert us with an epistemological riddle. Melville opens the debate over Billy's fate with a pair of rhetorical questions: 'Who in the rainbow can draw the line where the violet tint ends and the orange tint begins? Distinctly we see the difference of the colors, but where exactly does the one first blendingly enter into the other?'" In this formulation, the most important textual riddle, articulated several lines below, is omitted: "Whether Captain Vere, as the surgeon professionally and privately surmised, was really the sudden victim of any degree of aberration, every one must decide for himself by such light as this narrative may afford". Only the most authoritarian reader -- Richard Posner being among the most recent -- can avoid this inquiry or suggest, more benignly (as Prof. Delbanco does) that the story excuses Vere by making all decisions seem fraught with ambiguity. The insertion of the surgeon's doubts about Vere late in the genealogy of Melville's tale (see, e.g., The Failure of the Word, pages 145 et seq) helps shed the narrative "light" upon Vere's lawless obsession with Billy's death.

Prof. Delbanco does little with the surgeon, who privately surmised with other officers that custom and usage dictated not a drumhead court but a return to the fleet before Billy should have been tried, much less executed. Vere insists that the law requires him to hang Billy. He is wrong, and his fellow officers know this but lack the courage publicly to challenge their leader. Only the judges hand-picked by Vere courageously voice their doubts. Here, too, Prof. Delbanco's reading tilts towards Vere, as he speaks of "the judges . . . groping for some reason to defer judgment". The reasons were palpable to everyone!

The new book's account of the debate among Posner, Brook Thomas and myself will have to be judged more impartially by other readers. However, there is a troubling factual omission. on p. 384, where Prof. Delbanco reports (correctly) that Hayford and Sealts (the textual editors) ORIGINALLY argued that Melville simply did not know enough about the relevant naval law to "intend to imply that Vere was conducting an illegitimate judicial action" (emphasis provided). But later, as should be fairly well known, Sealts -- partly citing to my work --reversed his position:

"With regard to Vere's conduct of Billy's trial and execution, Hayford and Sealts [in their 1962 edition] concluded -- perhaps somewhat hastily --that Melville 'simply had not familiarized himself with statutes of the period.' 'Melville's expertise in naval law and history' must be assumed according to Richard H. Weisberg, a man trained both in literature and jurisprudence. . . [However,] Melville is inviting his reader to examine Vere's actions in the context of the story as he himself conceived it, not with strict reference to naval law and history." Merton M. Sealts, "Innocence and Infamy in Billy Budd Sailor," in John Bryant, ed., A Companion to
Melville Studies (N.Y.: Greenwood Press, 1986), 416-419, emphases in original.

The narrator explicitly asks us to judge Vere's sanity in summoning the drumhead court, in ignoring Naval usage and the covert rumblings of his fellow officers, in parrying the nervous court's own hesitation, in hanging a man beloved of the crew by suggesting they will mutiny if Billy is not hanged, in mustering the men back to work quickly after the disgraceful execution precisely to avoid that mutiny, and in violating law and custom at every turn while rigidly declaring himself bound by law and not his own natural conscience. Melville wanted this story, of course, to be for everyone, but it is now established that he knew enough of the law of the sea to be intentionally adding to the narrative "rainbow" Vere's hypocritical legal pronouncements.

Prof. Delbanco's new book, despite these qualms, must be read by all Melville enthusiasts.
Posted by richard weisberg Posted on 10/03/2005 01:56:00 PM No comments:
Email ThisBlogThis!Share to TwitterShare to FacebookShare to Pinterest
Labels: Billy Budd, Delbanco, Herman Melville

Sarat et al. on Law and the Screen 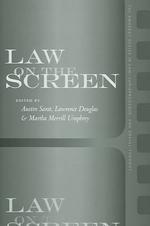 From the Book Description:

The proliferation of images of law, legal processes, and officials on television and in film is a phenomenon of enormous significance. Mass-mediated images are as powerful, pervasive, and important as are other early twenty-first-century social forces—e.g. globalization, neo-colonialism, and human rights—in shaping and transforming legal life. Yet scholars have only recently begun to examine how law works in this new arena and to explore the consequences of the representation of law in the moving image. "Law on the Screen" advances our understanding of the connection between law and film by analyzing them as narrative forms, examining film for its jurisprudential content—that is, its ways of critiquing the present legal world and imagining an alternative one—and expanding studies of the representation of law in film to include questions of reception.