Nables on Law, Literature, and the Civil War 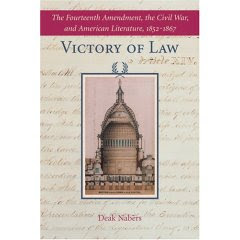 From the book description:


In Victory of Law, Deak Nabers examines developing ideas about the nature of law as reflected in literary and political writing before, during, and after the American Civil War. Nabers traces the evolution of antislavery thought from its pre-war opposition to the constitutional order of the young nation to its ultimate elevation of the U.S. Constitution as an expression of the ideal of justice -- an ideal embodied in the Fourteenth Amendment.

Nabers shows how the intellectual history of the Fourteenth Amendment was rooted in literary sources -- including Herman Melville's Battle-Pieces, Harriet Beecher Stowe's Uncle Tom's Cabin, and William Wells Brown's Clotel -- as well as in legal texts such as Somerset v. Stewart, Dred Scott v. Sandford, and Charles Sumner's "Freedom National" address. Not only were prominent writers like Ralph Waldo Emerson and Frederick Douglass instrumental in remapping the relations between law and freedom, but figures like Sumner and John Bingham helped develop a systematic antislavery reading of the Constitution which established literary texts as sources for legal authority.

This interdisciplinary study sheds light on the transformative significance of emerging legalist and constitutionalist forms of antislavery thinking on the literature of the 1850s and 1860s and the growing centrality of aesthetic considerations to antebellum American legal theory and practice -- the historical terms in which a distinctively American cultural identity was conceived.