Oren Bracha, University of Texas, Austin, has published Owning Ideas: The Intellectual Origins of American Intellectual Property, 1790–1909 (Cambridge University Press, 2016) (Cambridge Historical Studies in American Law and Society). Here from the publisher's website is a description of the book's contents.


Owning Ideas is a comprehensive account of the emergence of the concept of intellectual property in the United States during the long nineteenth century. In the modern information era, intellectual property has become a central economic and cultural phenomenon and an important lever for allocating wealth and power. This book uncovers the intellectual origins of this modern concept of private property in ideas through a close study of its emergence within the two most important areas of this field: patent and copyright. By placing the development of legal concepts within their social context, this study reconstructs the radical transformation of the idea. Our modern notion of owning ideas, it argues, came into being when the ideals of eighteenth-century possessive individualism at the heart of early patent and copyright were subjected to the forces and ideology of late-nineteenth-century corporate liberalism.


The examination of both patent and copyright ideas allows for a comparative dimension to the discussion, exploring elements of divergence and convergence between these two major fields 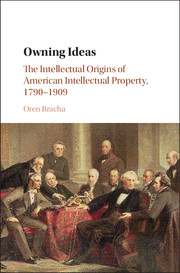